Blanch is currently trying out sections of the planned route – and seems to be thoroughly enjoying the challenge.  The photos below are from his walk from Minster to Littlebourne and depict aspects of Minster Abbey – including an image of St Ethelburga!

Back on the 14 October I found myself with a free afternoon and caught the bus from Lyminge down to Folkestone and the start of my next exploration along the Royal Saxon Way. I arrived in Folkestone just before 2.00pm and headed through the pedestrian precinct to the Parish Church of St Mary And St Eanswythe, at one end of the Royal Saxon Way. 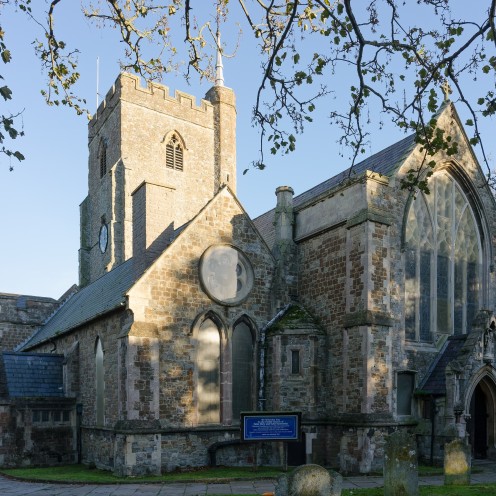 I headed down through the Bayle past the garden with Bayle Pond, the site where water was brought to serve the St Eanswythe Nunnery; a tranquil spot to sit and contemplate on a sunny day. I carried on down to the Parade Steps (through The Parade) with its views over the harbour. Looking back you can see an interesting building with a turret (No. 1 The Parade) which at the beginning of the first World War is believed to have housed German Spies watching the movement of ships coming from the continent into Folkestone Harbour. There are a number of interesting carvings on the gables.

I continued down to the Harbour and unsure of the exact route to take walked past the Harbour to the old Harbour Railway station and walked along the platform before tuning right onto the Broadwalk which sets off along the beach towards Sandgate. On joining the promenade I found myself with the sound of the sea splashing onto the beach and the colourful beach huts to the right. 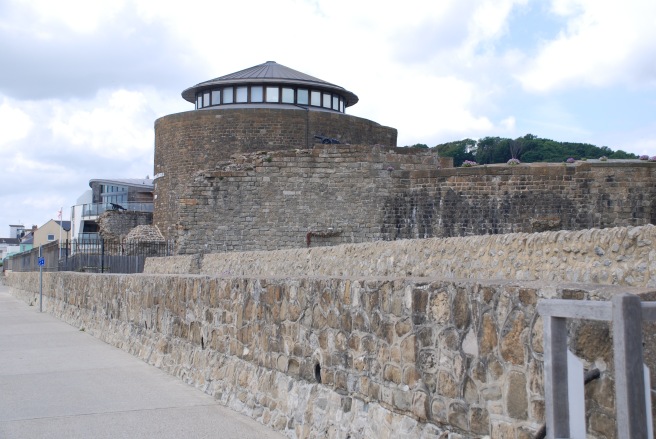 The walk carries on along the prom, and before you know it, you are in Sandgate walking past the castle which sits almost on the beach. At this point the walk heads in land away from the sea, with a gradual ascent up the Enbrook Valley exploring the Enbrook Park which sits alongside the SAGA HQ.

After a short climb up into Shorncliffe, the walk carries on alongside and through the army barracks which are gradually shrinking with the expansion of a new housing estate. Along North Road I passed the large brick built church, which originally formed the Garrison Church and is now the Tower Theatre, providing a home for the Folkestone Amateur Dramatic Society.

At present there is a lovely mixture of early army buildings built in the early 1900’s which are gradually disappearing as the new houses are constructed.

Continuing down Pond Hill Road there should be access to a footpath which heads off towards Valebrook Close, which unfortunately is not accessible at this time (due to housing development). If you continue down to the end of Pond Hill Road and joint Cheriton Court Road you come back onto the correct route and are able to join up with Horn Street. Here I found the third church on the walk, St Martin’s Church, Horn Street.

This is a lovely church – which was shut unfortunately. However, there was a sign in the door stating that Mr Plimsoll who initiated the Plimsoll Line which is painted onto ships to stop overloading, is buried in this church yard. I did not find the grave, but it would be an ideal spot to stop and explore.

It had taken me around two hours to get to this point and it would be a good spot to stop, Cheriton being close by catch a bus back to the start. This would all make an ideal walk for an afternoon and allow a lot more time to explore or sit and look at the different views on route.

However I continued heading off towards St Martin’s Plain and Dibgate Camp, which is an extension of the Army Barracks providing good training country. I escaped from walking the tarmac prom and paths of Folkestone, Sandgate and Shorncliffe, and started to enjoy the soft grass paths. The walk joins up with the Elham Valley Way and heads over the M20 to the village of Newington, with a further church to explore.

Path along the old railway line

Across the Golf Course

As it was getting towards the end of the day I did not stop to explore, but carried on up the old Elham Valley Railway line which heads up to Etchinghill through some lovely woods. As you walk up into Etchinghill you get lovely views of the rolling countryside.

At Etchinghill the rain started so I took the short cut through the village back to Lyminge, bypassing the Beacon on Tolsford Hill.

All in all it was a lovely afternoon walk, which if taken as a full day would allow a lot more time to explore. The millage was just over eleven miles and took three hours, so could easily be broken down into a number of shorter sections using the buses to allow a more linear walk or for you to create your own circular walk.

This section of walk certainly had a variety of different terrains and will be explored further to enjoy a number of the points of interest on the way.