Green Pilgrimage is a European network.  There is a green pilgrimage project funded by the European Union (yes this is money coming into the UK) to promote environmentally-friendly pilgrimage across Europe.  One of the partners in the project is Kent County Council and last week, Kent was hosting a conference in Canterbury to take stock of progress to date.  Conference delegates came from as far away as Romania, with others from Italy, Norway and Sweden, as well as the UK.

Great news is that the project’s Royal Saxon Way (RSW) has been adopted as one of the routes for Pilgrimage in Kent, an initiative being taken forward by Kent County Council under the management of Kent Downs.  If you were at the Canterbury Pilgrim Festival Feast on Saturday, you would have had a chance to see the promotional banner that has been created for the RSW as well as for the other routes in Kent.

Some great work has been done developing the concept of modern pilgrimage.  There is more to pilgrimage than just the Canterbury Tales or even the Santiago Camino.  You can still go on a traditional pilgrimage over several weeks to a shrine like that of St James at Santiago de Compostella in northern Spain, or to Rome following the via Francigena from Canterbury.  But pilgrimage can also be local and may be you just set aside a day or two.  Such local pilgrimage, especially using public transport, can be very environmentally-friendly.  You can read more about the RSW and how it fits in with green pilgrimage here

Conference delegates practised what they preached and we had an enjoyable but very wet excursion on to the pilgrimage route of the North Downs, near Hollingbourne.

However, the rain did not dampen our enthusiasm and we very much look forward to developing green pilgrimage, including the Royal Saxon Way, further over the months and years ahead. 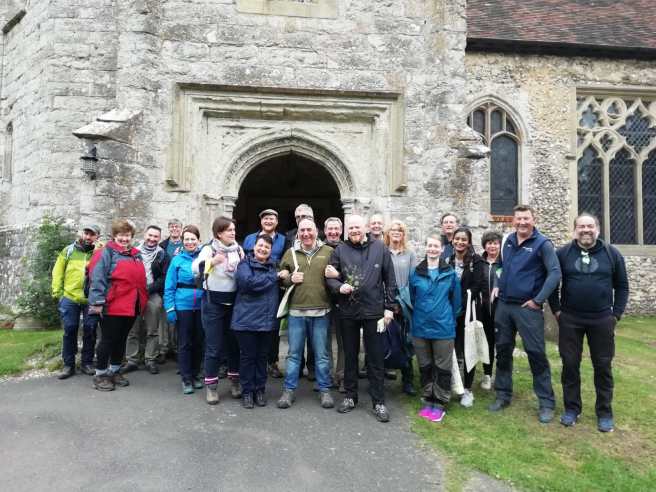 One thought on “Pilgrimage and Lyminge”