Work continued on site today in good conditions.  Trench 1, opened yesterday in the New Churchyard has been taken down to the chalk bedrock and cleaned up.  The pits appear to be natural formations.  This trench will now be back-filled as there is nothing of further interest to be found.

Close by, Gabor thought it was likely that there would be remains of the spoil heaps left by Canon Jenkins when he dug the Anglo-Saxon church in the 19th Century.  Having opened up Trench 2, it would seem that he was right.

Some interesting very coarse and thick hand-formed pottery has been revealed. 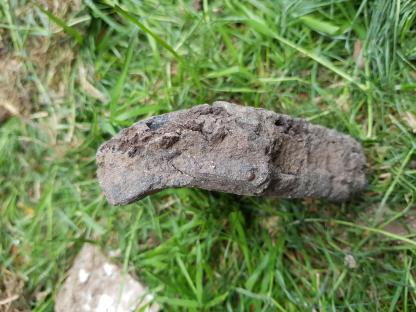 This rim sherd indicates the vessel had a very bulbous side, but there is hardly any curve suggesting this was not a round pot and perhaps more square or rectangular.  For the moment we have no idea of date or indeed what it is.  There are a number of sherds of this ware.  They seem to have been dumped in a pit, suggesting that Canon Jenkins’ workmen simply dumped them over the boundary into what was then Abbot’s Green.  This was just a meadow at the time, as you can see from this photo of 1890.  There are also lots of Kent peg tiles, but we do not know from what building they may have come. 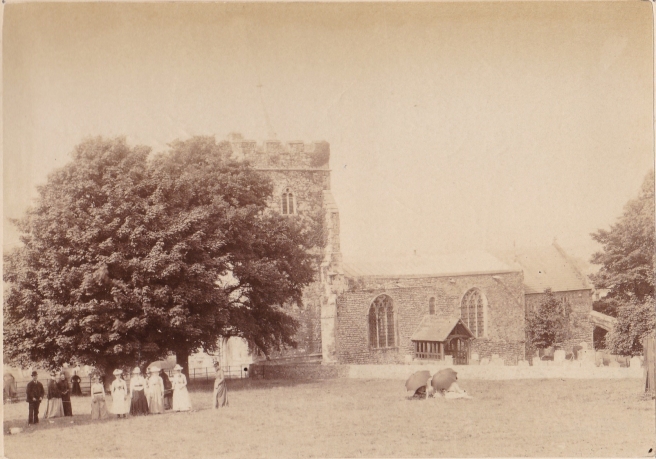 Preparations continue around the churchyard and the temporary path has been laid providing access via the North Door.  This will allow the church to continue in use during the dig, even though the main path and access via the south door will not be in use.  If you have been up to the churchyard already, you will see that we have put up signs to indicate where you can walk.  There are fences up marking the edge of the area where you can’t go unless you have attended the health and safety briefing first. 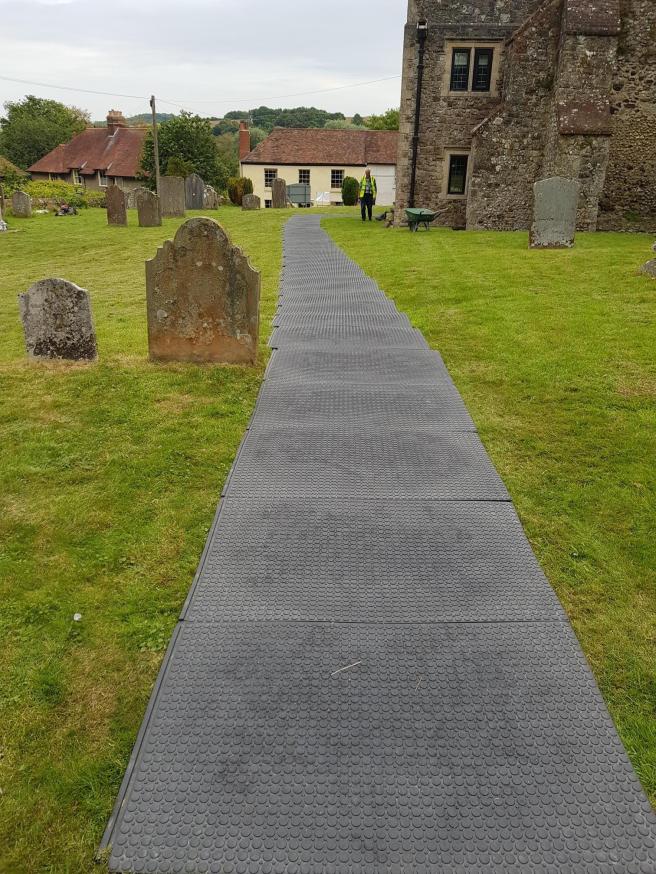 We are grateful that Kent County Council, as the highway authority responsible for maintaining footpaths, has reviewed the state of the footpath outside the churchyard in Church Lane and has decided to remove the grass that has grown over the surface, making it difficult to use.  In fact, the grass is only a thin skin that has grown over the tarmac that was laid below, at least into the 1960s according to one local resident we have spoken to, and possibly later than that.  A stable surface has been revealed beneath the grass, so it will be much easier in future for people to use this path.  Residents will be aware that the owner of Church Lane is disputing whether a public right of way has been established over the whole lane, even though people have been walking over it freely for many decades.  The action taken by KCC will make it easier in future for people to avoid walking on Church Lane, if they wish to, in order to access the churchyard or Court Lodge Green.

One thought on “Day 3 and the preparatory work continues”