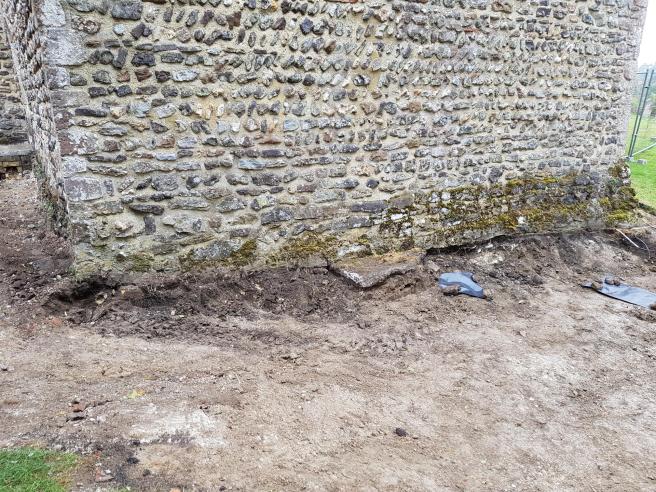 There has been more heavy work requiring machinery than we had originally anticipated, but the work is now complete.  We have taken out the concrete and flints from around the base of the chancel of the standing church, as you can see here at the east end.

The guttering has also been removed from the south side of the church, so it will be possible to investigate right up to the footings of the standing church.  We have now finished machining the site and all the work from now on will be with hand tools, as we begin to investigate the remaining archaeological layers.  We hope that Canon Jenkins has left us something to investigate.

When Canon Jenkins was digging this site, his main aim was to identify the burial place of Queen Ethelburga, who is recorded as the foundress of the church in or around 633.  He was clearly confident that he had found this spot because he placed a tablet in the wall of the church, which is still there today as you can see in the picture above.  In fact he may have been on the money for once, since we have uncovered what appears to be a structure extending out from the chancel wall of the Anglo-Saxon church, projecting under the wall of the standing church.  This structure seems to be built using the same pink mortar as the rest of the Anglo-Saxon church, and thus appears to be contemporary with it.  The most obvious explanation for this structure is that it is a porticus, a kind of side chapel that is typical of churches of this period.  A porticus served a very particular purpose, which was to hold the remains of the dead.  The relics of saints would typically be contained within a porticus.  Are we seeing here a porticus?  If that is what this is, and if it is a part of the original build of the church, there is a fair chance that this could indeed be the site of the tomb of Queen Ethelburga.  We shall have to see whether further excavation makes the position clearer. 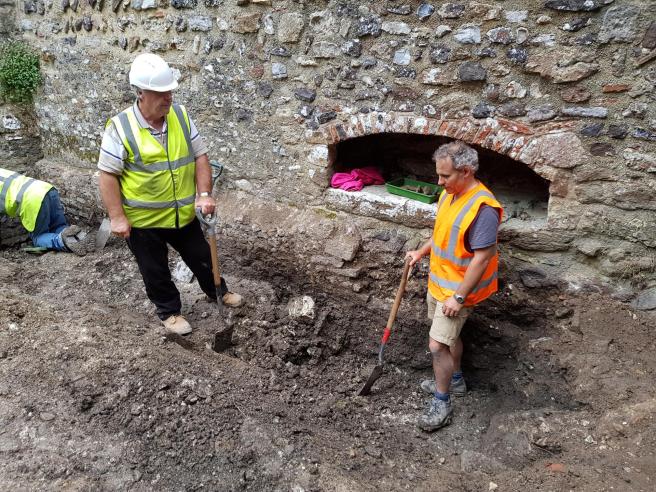 Further work around the enigmatic niche to the west of the porch is suggesting that this is not an ancient feature.  It is possible that this might have been created by Canon Jenkins, seeking to investigate the great slab at the base of the niche.  It is difficult otherwise to explain why it has been hacked out of the fabric of the wall.  It was not built as part of the wall when the wall was constructed.  It is also difficult to explain why the plinth supporting the church wall has been cut away.  You can see this cut-away behind Gabor Thomas to the right of the picture above.  It is possible that this was removed to see if there was a void beneath the great slab.  Clearly there isn’t.

Canon Jenkins went to a great deal of trouble to present this area, revetting it with bricks and grave slabs so that the wall could be viewed.  This is ironic in a way because it appears that the nave wall of the Anglo-Saxon church has been destroyed almost entirely in this area, and the only masonry to see dates to around the time of the Norman Conquest.  We are fairly sure that Canon Jenkins would not have gone to so much trouble to display this wall if he had realised what it actually appears to be.  It will be interesting to see if this initial hypothesis is borne out by subsequent work over the coming weeks.