Thursday was a very hot day and it was decided to work only a half day to avoid the heat and humidity of the afternoon.  Nevertheless we made reasonable progress over the morning. 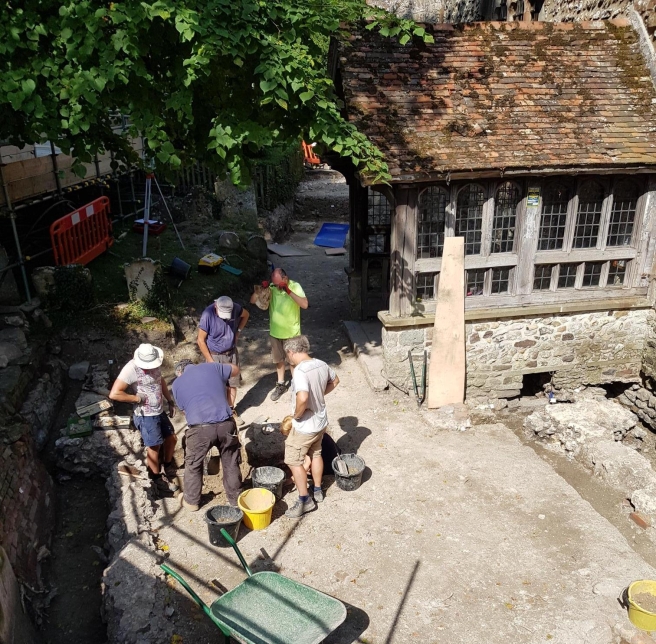 The focus was on the cross-wall separating the chancel from the nave.  If you have been following the blog, you will know that this appears in two fragments, looking almost as if they are column bases.  But free-standing column bases would not work very well to disperse the downward pressure coming through columns supporting arches above.  So we thought that this must have been built as a continuous wall across the whole space.  It was just that most of it was missing.

This picture shows that we have a further small fragment of the cross wall appearing at a lower level.  This does reinforce the view that the wall was continuous when built and it has simply been lost.  The gap between the fragments visible in the picture above could result from a grave cut, although we have no evidence at this level for any grave.  The contents of the trench are currently undifferentiated back-fill.

We have also begun cleaning round by the buttress where Canon Jenkins said he found a great mass of concrete.  He thought this was Roman concrete, though if this was cast on site, we think this is highly unlikely as we have no evidence for Roman period occupation in Lyminge.  Lumps of Roman concrete, like brick and stone, could have been robbed from a Roman site elsewhere, such as the fort at Lympne, and brought to Lyminge, but as the Anglo-Saxons were building with stone in the 7th century, and used concrete on Tayne Field, they may have been using concrete at the church too.

One thought on “Day 16 – The chancel cross-wall revealed”