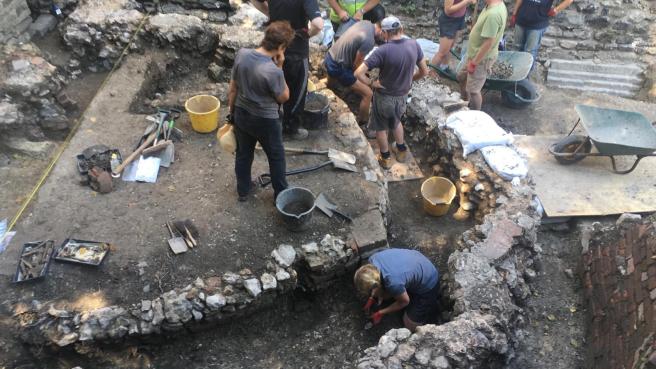 We had the highest number of volunteers so far on site today and they made short work of the 20th Century backfill within the chancel.  What you see in the picture above is the Anglo-Saxon 7th Century chancel wall to the right, and to the left curving around within the chancel, is a retaining wall that was built by Canon Jenkins.  This revetment supported the fill in the interior of the chancel that we now think he did not dig because he needed the church path to run over the middle of the Anglo-Saxon foundations, as you see in the picture below dating to around 1905.  In this picture, the retaining wall is running to both sides of the path as it heads towards the porch.  The grill at the bottom of the picture is placed on the outside of the apse wall, which you can see curving round from both right and left. 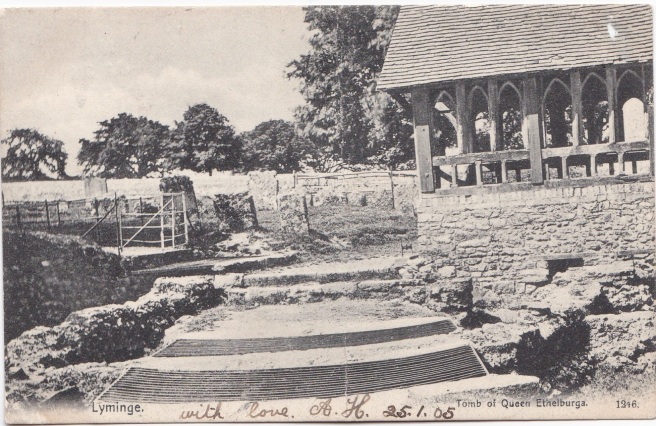 We have found evidence of the way the archaeology was underpinned with  bricks before it was reburied 90 years ago.  This is clearly not very satisfactory and will need remediation before the walls are reburied in the Autumn after the dig has ended. 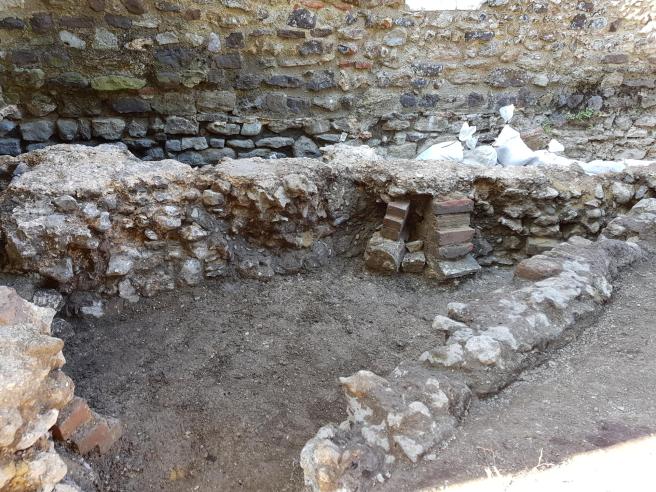 The island of “undisturbed” archaeology in the middle of the chancel is clearly visible in the picture below.  “Undisturbed” is a relative term.  It is undisturbed by Canon Jenkins.  This ground may well contain burials, but these could be early, and if they are they would be archaeologically significant. 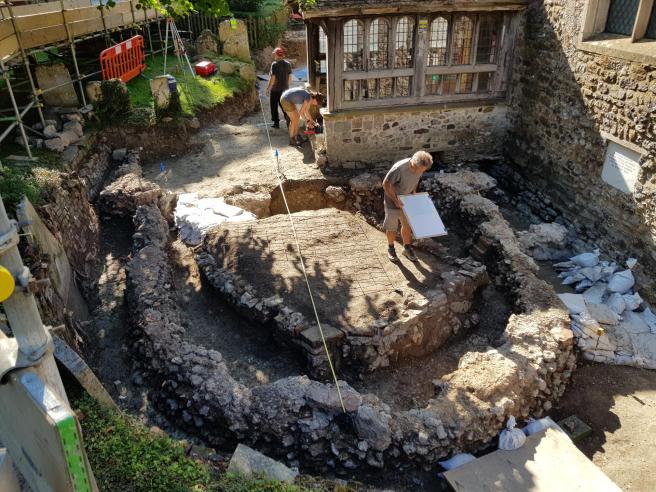 Down the slope away from the church itself by the late 15th Century buttress that supports the chancel of the Norman church, we are taking out a lot of disturbed ground.  There are burials in this, and apparently debris deposited by run off from further up the hill. 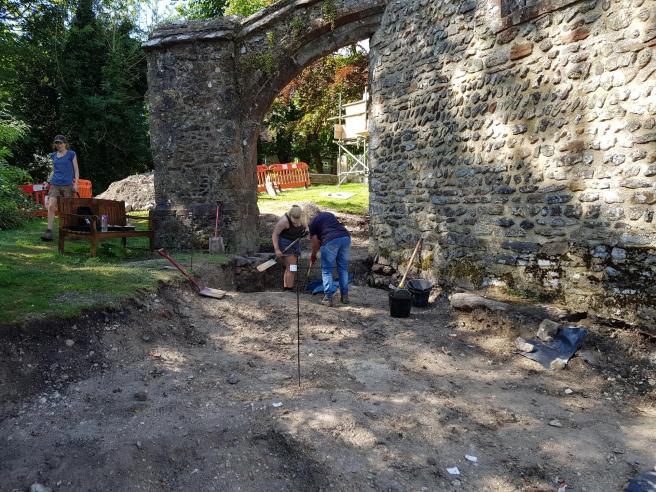 We are getting a variety of interesting finds from this area, none securely stratified, but the fact that they are here at all suggests that they come from activity in the immediate vicinity.  We are now down at a level where we are picking up burials, which again are likely to be early, so the grave fill will probably contain early material.  Such grave fill may contain vital dating evidence. 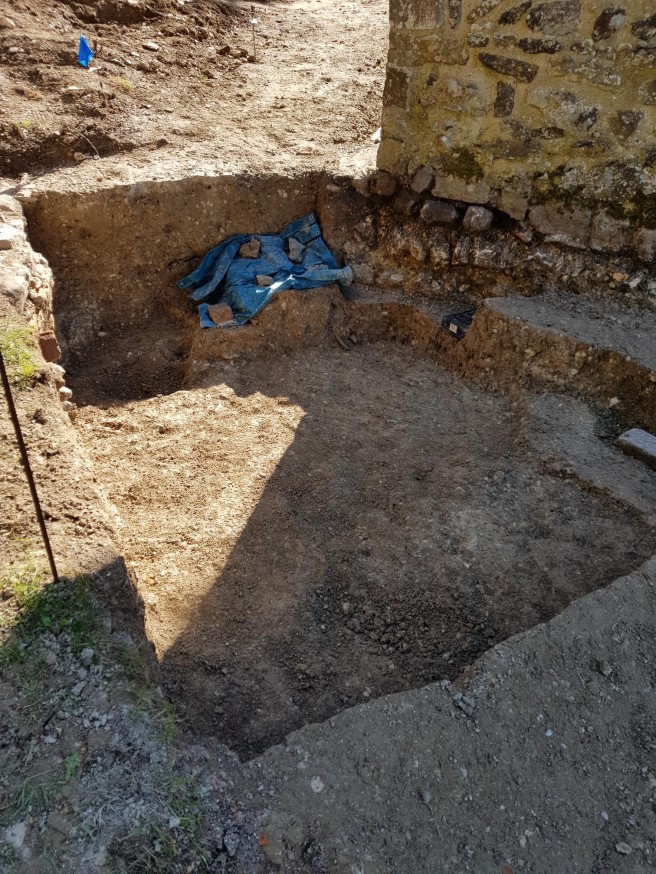 The pottery below is the earliest so far, comparable to the earliest pottery found on Tayne Field, and pre-dating the church by at least 100 years. 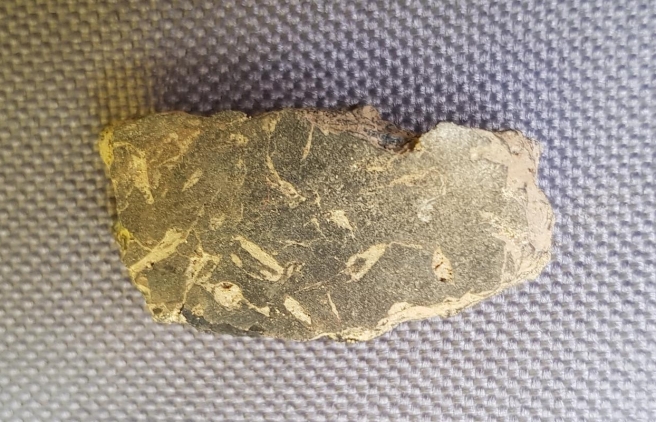 The piece below could date to the time of the building of the church in the 7th Century. 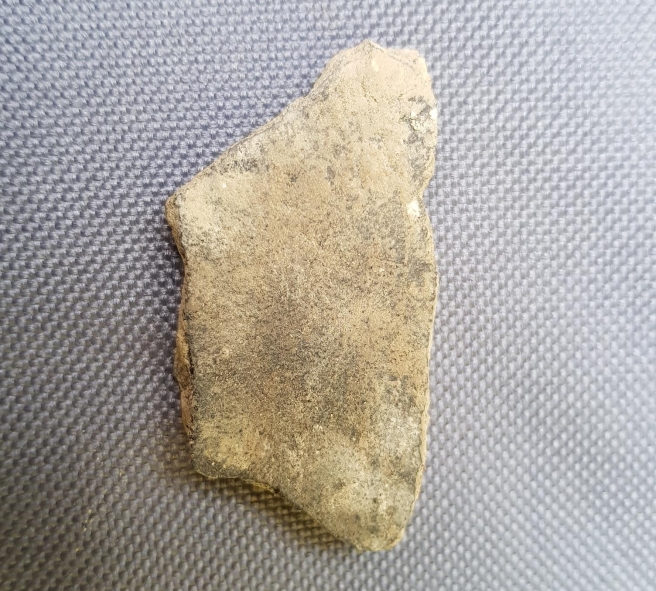 Further investigation inside the standing church has revealed traces of what might be the original Norman windows in the east wall of the chancel.  The picture below is looking to the right of the chancel window.  There is the trace of a curve by the roof timber which could be the outline of a small round-headed window that was filled in when the current east window was inserted in the late 15th Century. 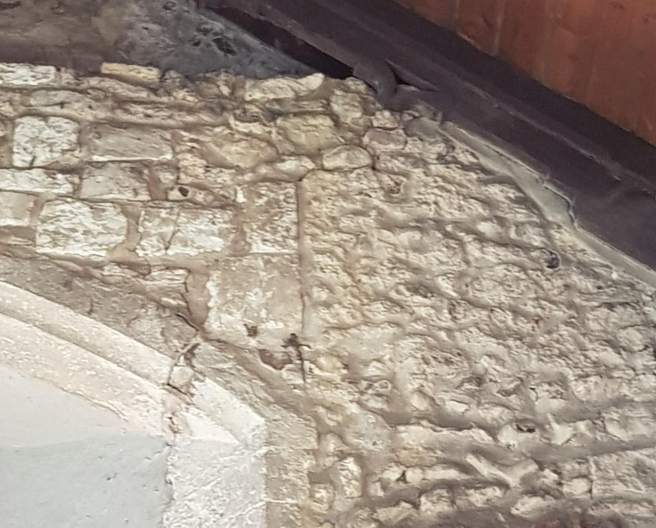 There is a similar trace on the other side, but this time it is a remnant of the bottom of the window that appears.  You can see this in the picture below, to the left of the large block that appears just above where the 15th Century window arch starts to spring. 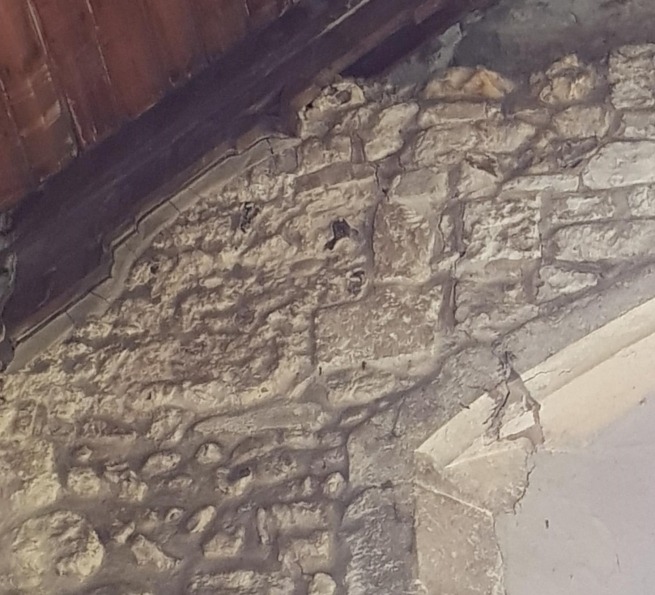 Making sense of such fragments, and perhaps others, is possible once the church walls have been photographed comprehensively.  It is remarkable how details, long-since obscured by later additions, can stand out in such photographs.  We hope this work will begin to tease out more details of how the current church has changed over time, and help us address whether it is post-Conquest, or perhaps dating to the period before the Conquest when England was already adopting a “Norman” or Romanesque style of architecture under Continental influence.

The Norman Conquest of England in 1066 was not the great watershed in style and influence that it is sometimes made out to be.  Normandy was already becoming strikingly influential in the century prior to the Conquest.  The King of England Æthelred the Unraed (or “ill-advised”) (1002-16) was married to Emma a daughter of Richard Duke of Normandy (great grandfather of William the Conqueror).  This made Æthelred and Emma’s son, King Edward the Confessor, half-Norman.  Emma had even more influence than this since after Æthelred’s death, she went on to marry his successor as King of England, the Dane Cnut (1017-35), and she was mother to King Harthacnut (1040-42).