Because of the bad weather over night, Day 29 was a wash-out so far as digging was concerned.  We did however manage to get in our standard half day on Saturday, when we continued with excavating the burials in the chancel of the Anglo-Saxon church.  At the moment, we have no reason to think these are anything other than burials inserted between the date the Anglo-Saxon church was demolished, probably in the later 11th Century, and when the porch was added in the later 15th or early 16th Centuries.

46 people braved the strong winds at 2 o’clock to hear me give the round-up of the week.  It was hard going speaking against the wind.  But if you missed anything because you could not hear me, or if you simply weren’t able to be there, hopefully this summary will help to fill the gaps. 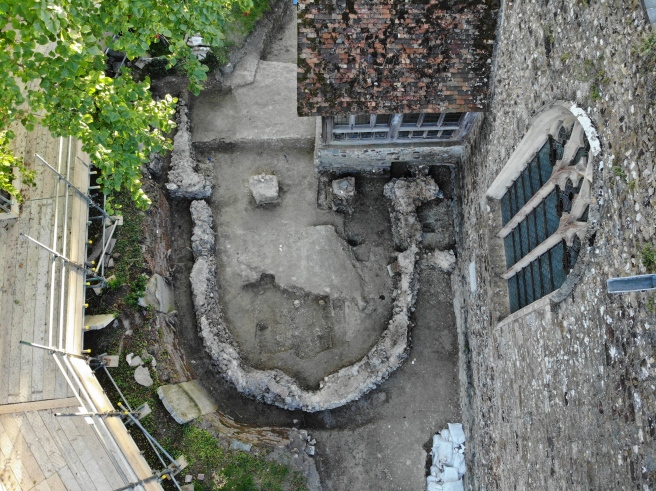 Over the past 5 weeks we have revealed a church that stylistically is very similar to other very early churches, such as those of St Pancras in Canterbury and St Mary at Reculver on the north Kent coast, about 16m long, with a stepped apse (ie narrower than the nave) and a triple arcade dividing the chancel from the nave.  The foundations are all that remain, built of local flint using a lime mortar mixed with crushed Roman brick to give it a distinctive pink colour.  We have a fragment of one of the columns that supported the arcade, and it is made of oolite.  The nearest source for this is Frankia (roughly modern-day northern France), from where the masons who built the church also probably came.  The links between the Kentish and Frankish royal families were strong, and Queen Æthelburh (or “Ethelburga”) who may well have founded the church in the 630s had a Frankish mother, Bertha, so it is not surprising that the church is revealing evidence for contacts with Frankia.

So far, we have no evidence of the dressed stone blocks that Canon Jenkins, who excavated the church in the 19th Century, said he found surviving just above the foundation layer.  He described these as of oolite too, though this may perhaps be just indicating that Jenkins knew they were not local to the area, and particularly did not derive from the Folkestone and Hythe beds.  If the church was built of dressed blocks above ground, probably interspersed with layers of re-used Roman brick, this stone has long-since been taken elsewhere.  It probably went to Canterbury as Lyminge was under the control of the Archbishop when the Anglo-Saxon church is likely to have been demolished in the 11th Century.  Anything that Jenkins himself found has similarly been robbed at some point since the 1850s.

Discoveries in the past week, from grave fill in the chancel and from further down the slope by the buttress at the end of the chancel of the standing church,  have revealed plaster that probably derives from the interior of the Anglo-Saxon church.  We have a fair amount of white, and a single fragment of a lovely pinky red. 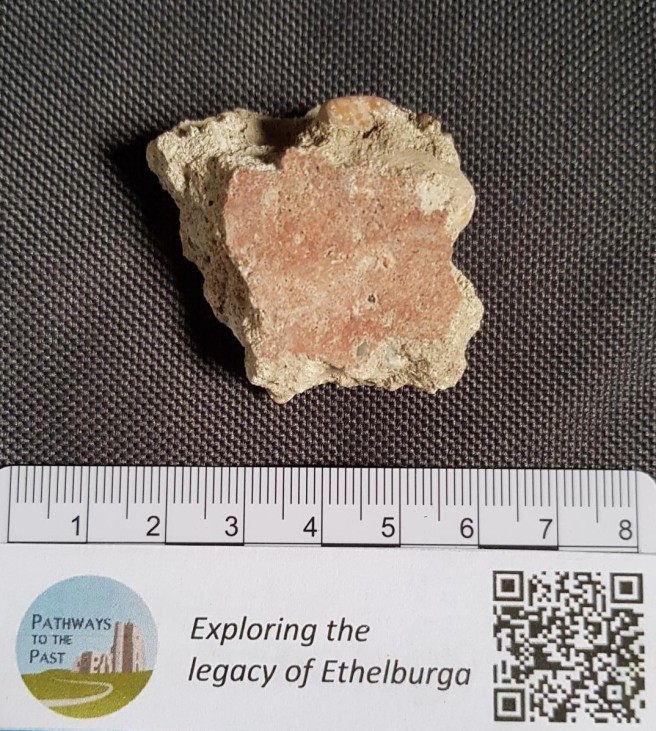 So adding this to the column fragment, we now have a good indication of a number of the interior elements of the church.  We also know its precise dimensions from the single surviving fragment of the west wall, which was cut on two sides by graves but miraculously survived, and which was entirely missed by Canon Jenkins.

To the north side of the Anglo-Saxon church we have a structure that so far we know survives as a single stub of wall projecting northwards against the south wall of the standing church.  There is probably another parallel wall under the porch but we haven’t yet investigated there.  This wall is the surviving fragment of a structure known as a porticus.  At the time the church was built, it was forbidden to bury inside the walls of a church, so important burials would be placed in one or more porticus (the plural has a long “u” pronounced like the “oo” of goose) on the outside.  The fabric of the porticus that we have found is the same as that of the rest of the church, so it appears to have been built at the same time.  Assuming our dating of the church to the mid 7th Century is correct, the obvious candidate to have been buried in this porticus was Queen Ethelburga herself, who is recorded as having died on 13 December 647.  The church may have been built in her lifetime, or shortly afterwards.

As it happens, we have a description of Ethelburga’s tomb that dates to the 1090s which describes it as “quite prominent and majestic“, situated “in the north porticus, by the south wall of the church, beneath an arch“.  The current parish church was almost certainly standing by this date, so this description fits the porticus we have found, even to the extent that the porticus straddled the arcade dividing the chancel from the nave, and thus in a sense did lie beneath an arch.

We now know that the south door of the Norman church was exactly where the door is today, so access was needed on this side by the time the nave came into use.  This would have been impossible if the Anglo-Saxon church was still standing.  It is therefore conceivable that the chancel of the standing church was built in the years soon after the Conquest, perhaps after Lanfranc became Archbishop in 1070.  Once it was complete, it could have been consecrated and brought into use.  This would have allowed the Anglo-Saxon church to be demolished while the nave of the standing church was constructed alongside.  Perhaps the porticus containing the tomb of Queen Ethelburga was retained initially, but following the removal of her relics to St Gregory’s in Canterbury in 1085, it was then demolished as being redundant.  The south door to the church could only have been built where it is after the porticus was demolished. 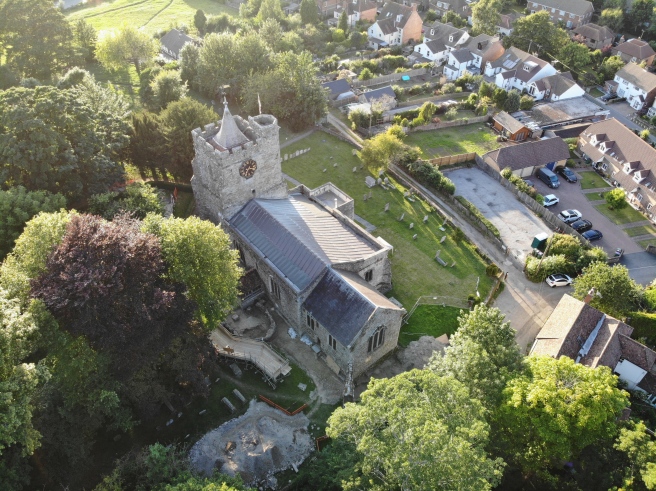 In the aerial view above, it is possible to see the chancel of the Anglo-Saxon church sandwiched between its Norman successor and the viewing platform for the dig.  We are now confident that the standing church dates to after the Norman Conquest.  The description from the 1090s indicates that it was standing by then.  The presence of Quarr stone, from the Isle of Wight, from a quarry that seems to have been worked only from the later 11th Century, does suggest a very narrow window for its construction.  The Norman church comprised the chancel and nave that are clearly visible in the picture above.  The north aisle and tower were additions of the later 15th Century.

The date of the Anglo-Saxon church itself depends almost entirely upon comparison with the tiny number of similar churches like St Pancras in Canterbury dating probably to between 620 and 650, or St Mary’s at Reculver built around 669, or St Peter’s at Bradwell-on-Sea in Essex, known to have been built by St Cedd around 654.  Such dating is therefore not absolute, and we may not find any evidence to give us an absolute date because it was removed by Canon Jenkins.  However, during the past week, we have been delighted to find more evidence for the monastic enclosure associated with the Anglo-Saxon church that was first discovered in 2008 to the south west.  The recent finds are much closer to the church than the ones from 2008-10, by the War Memorial, and include stratified pottery dating probably to the mid 7th Century.  While not firmly dating the church, this does serve to demonstrate more activity of an early date in the immediate vicinity and it is starting to look as if there was a community living and working right across the hillside to the south of the church from an early period.  This is reinforcing the case for the early foundation of a monastery at Lyminge.  Some have argued that monasteries were not founded as early as the 630s and they are really a phenomenon of the 660s and 670s onwards.  It is probably still true that this is when they began to flourish across the eastern parts of England, but this does not stop the first tentative exploration of monastic community life beginning in the household of the dowager Queen Ethelburga, following her return to Kent in or around 634.  Recent finds are making this possibility more and more likely.

Over the past 5 weeks, it has become very clear that while we have an exceptionally important early, probably mid 7th Century Anglo-Saxon church in Lyminge, it is not the church that Canon Jenkins envisaged.  He believed that the description of the church as a ‘basilica’ in the earliest surviving charter dating either to 697 or 712 was to be taken quite literally, and he projected the remains he found into a vast three-aisled structure much larger than the Norman church.  We have found no evidence to support this view.  We have searched for walls beneath the path leading south of the church (to the bottom of the picture above, and have found nothing.  We also know that Jenkins distorted his records to make the walls fit a neatly symmetrical plan.  Further investigation has also revealed that he did not draw what he actually found, so we are in a sense literally re-writing history.  Don’t always believe what Antiquarians of the past had to say, however confidently they may have said it.  Even clergymen were clearly not above twisting the truth to fit their views.

We have found a small hint of another structure to the west of the main church that might just be the remains of another church built in line with the first.  This is not uncommon at Anglo-Saxon sites, and there are, for example, three early churches in line at St Augustine’s Abbey in Canterbury, which includes the church of St Pancras already mentioned.  We also know from excavations in 1991 that there was a structure in the Memorial Garden, under the start of the walkway to the left of the picture above.  This may have been a free-standing tower, perhaps of a number of construction phases dating to the later Anglo-Saxon period.  Lyminge churchyard is therefore clearly an interesting and extensive site.  We have already answered many of the questions we had when we began the dig 5 weeks ago.  We have found much that we did not expect to find but we also do now have some more questions.  Whether we will be able to answer them all over the last 3 weeks of the dig remains to be seen.

Over the coming weeks, we will be undertaking laser scanning that will be the preliminary to producing digital 3D reconstructions of the site as it develops through its 1,400 year history.  However, we still need to secure the funding to make this a reality.  If you are reading this blog, support our efforts and are keen to see these reconstructions created, please do help us by donating to our appeal at Go Fund Me.  This project has only been possible through the generous support of many people already, but there is still a long way to go.  Many thanks in advance for your help.