When we began to excavate burials within the chancel of the Anglo-Saxon church, we thought it was likely they were later medieval and not contemporary with the church itself.  Up to now we have found no finds to give any kind of date.  However, at last we have some pottery, from what appears to be the lowest, and therefore the earliest, burial at the east end.  The earliest piece is quite freshly broken so would seem to have got into the grave fill quite early on.  It probably dates to around 1100. 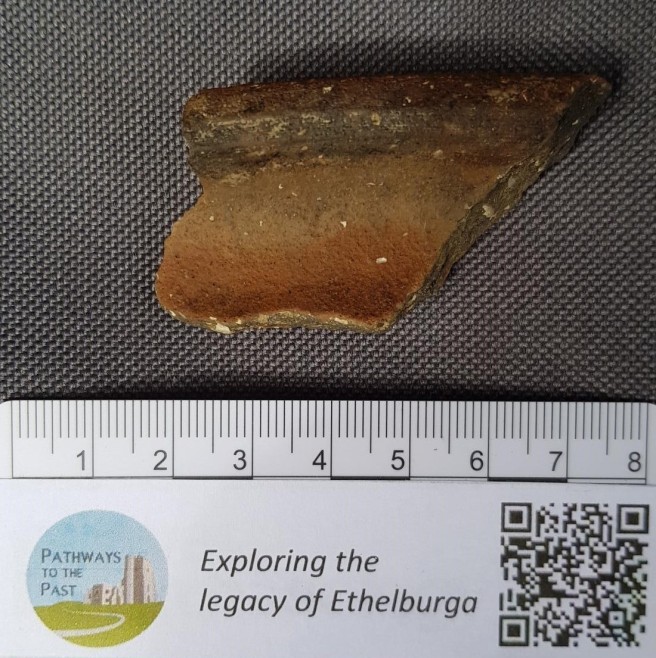 However, there is a second piece with green glaze that is later, perhaps dating to the 13th Century.  This indicates that the burials began in the chancel of the Anglo-Saxon church after it was demolished, probably after it had already passed out of memory, and perhaps because it had passed out of memory. 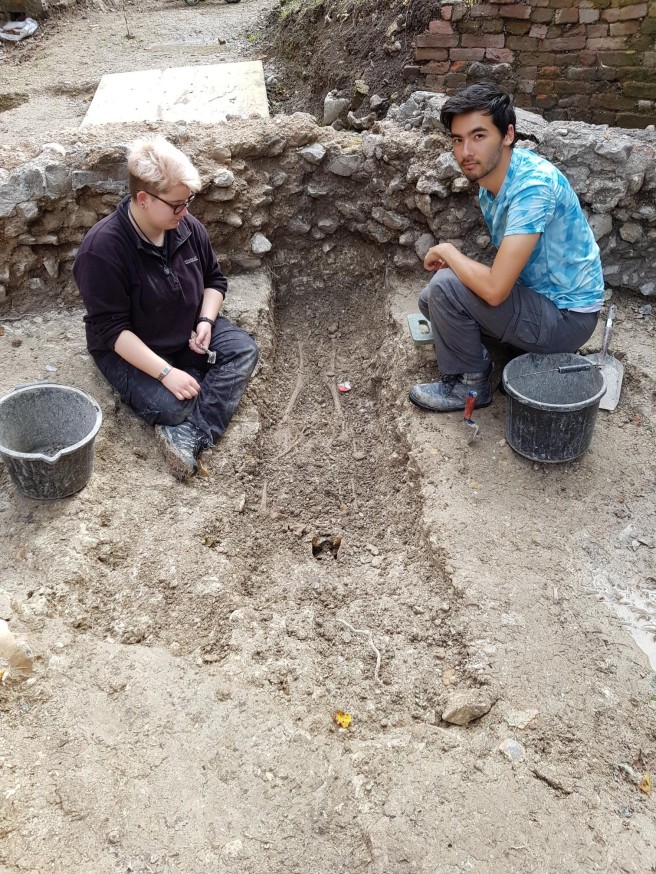 In the picture above, it is possible to see also that the grave cut for this burial has chopped into the wall of the chancel.  This is one of three such cuts on the inside of the chancel.  Canon Jenkins saw them and thought they were a feature of the church, although such “niches” are not found in other churches of this date like at St Pancras, Canterbury or St Mary, Reculver.  The grave cut neatly fitting the “niche” is good evidence that these were nothing to do with the Anglo-Saxon church itself and result from later burials cutting masonry away.  It was difficult to understand why niches would have been reflected in the foundations below ground.  This discovery reveals the cause.  The find of pottery demonstrates that burials began in this area probably in the 1200s, perhaps 100-150 years after the Anglo-Saxon church was demolished.

Up by the War Memorial, we have extended the trench there because of the range of features we are finding.  This is beginning to suggest that the middle of the monastic enclosure was a busy place with a range of activity.  The area of the path is the only part of the site that is ever likely to be dug because of the burials to either side, so we are making the most of the opportunity to look at this.  It is proving much easier to examine because we know where the burials are and there are none where we are excavating.

Readers of this blog will remember that we found a fragment of one of the columns that supported the triple arcade between the chancel and nave.  This fragment has now been studied and identified as stone from Marquise, inland of Boulogne in France.  This is not surprising as this is the same source for the columns from Reculver, but it is nice to confirm yet another way that the church at Lyminge matches 7th Century churches elsewhere.

One thought on “Day 34 – Confirmation of some earlier speculation”