The BBC were on site in the morning recording for the South East News programme.  We were initially scheduled to give a live broadcast on the lunchtime bulletin, but this was pulled at the last moment.  The broadcast went out on the 6.30pm bulletin, available here on IPlayer but only until 7pm on 21 August.

There is also a news item posted on BBC News.

This was not the end of the media interest because Academy FM, the Folkestone local radio station also interviewed us in the afternoon.

And then after that Gabor was interviewed by BBC Radio Berkshire.  In case you are wondering, the link here is that Gabor is based at the University of Reading, which is in Berkshire.

We have been visited by architectural specialist Richard Gem who has supported the dating of both churches, ie mid 7th Century for the Anglo-Saxon church and late 11th Century for the earliest parts of the standing church.  He agrees with the suggestion that the “niche” cut in the side of the south wall is not an original feature, and thus probably attributable to Canon Jenkins.  Much of the wall around the “niche” has been rebuilt.  It is therefore intriguing that when we were visited by another specialist, local geologist Geoff Downer, he identified another fragment of Marquise stone.  It is the large pinkish block in the middle of the photo, below the re-used Roman brick. 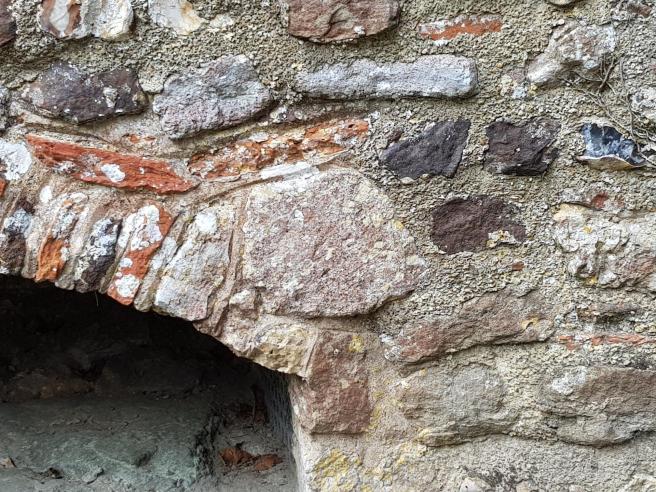 Readers may recall that the column fragment that we believe comes from the triple arcade dividing the chancel from the nave was made of stone from Marquise, near Boulogne.  Canon Jenkins seems to have missed the significance of that fragment and allowed it to be built into the revetment for his restored path to the church.  It seems too that he missed the significance of the fragment in the photo above.

It is plausible that like the first column fragment, the piece in the photo above was also lying around after the Anglo-Saxon church had been excavated.  Once Canon Jenkins had finished investigating the south wall of the standing church, he obviously decided to leave a hole displaying the large slab of Folkestone stone, which is now forming the base of the “niche” and which he thought was a threshold stone from the Anglo-Saxon church.  In rebuilding the wall to make the hole more presentable, it seems quite possible that the workmen simply took stone that was lying around.  The piece in the photo above is almost certainly from one of the chancel arcade columns.  The fact that we don’t find other fragments of Marquise stone re-used in the fabric of the standing church does support the view that they were not re-used when the church was originally built, and this stone is only there now because of a Victorian repair.

Over in the War Memorial trench up in the New Church Yard, the massive wall discovered last Friday continues to be intriguing.  It represents the remains of a substantial building.  At the moment the most likely solution is that this is part of the so-called “Archbishop’s Palace”.  We know there was a residence of a kind in Lyminge in the later medieval period, that Lyminge belonged to the Archbishops of Canterbury from the 11th through to the 16th Centuries, and that in the later 15th Century, a lot of money was spent on the church.  The tower, the north aisle, the large windows in the south and east walls, and the chancel arch all date to around this time.  Previously the view was that the “palace” was out on the building platforms of Court Lodge Green, the bumps of the “Bumpy Field”, which lies next to the churchyard.  It is possible that the structures of this “palace” extended on to the ground now occupied by the New Church Yard, which was the meadow once known as Abbots Green. 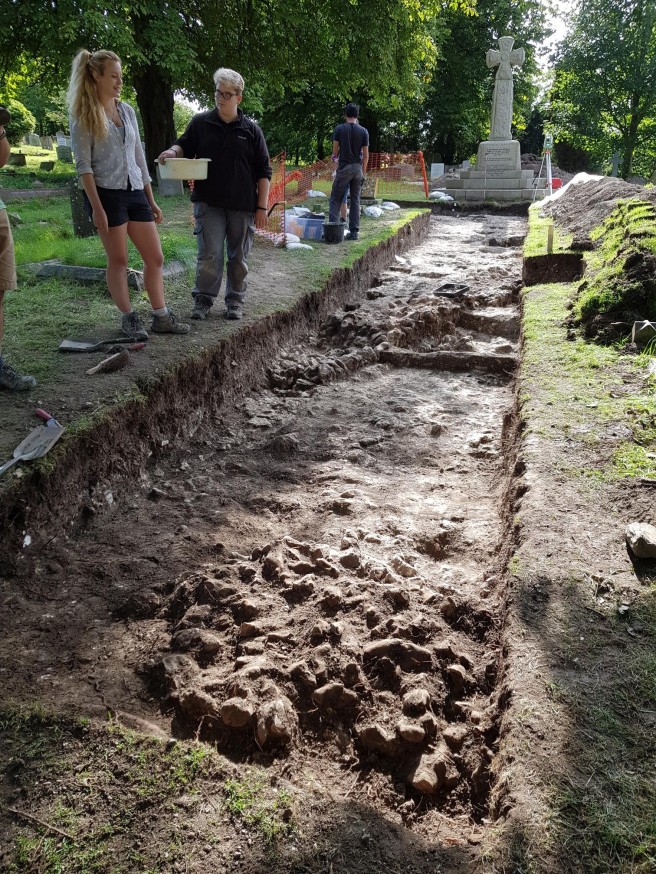 We are continuing to extend the trench eastwards in the direction of the church, and have uncovered what appears to be another wall of this structure at right angles to the first.  There is a range of activity of different dates in this trench.  We continue to find Anglo-Saxon pottery, but there is no reason to think this massive wall is so old as none of this pottery is associated directly with it.