Despite the current lock-down, we are still able to carry on with some work streams for the project.  Yesterday, Gabor Thomas and I had a video conference with the team at the Centre for the Study of Christianity and Culture (CSCC) at the University of York who will be preparing for us the digital reconstructions of the church through its 1,400 year history.  We will be installing a touch screen in the church that will give access to a range of information about the dig and about the sequence of churches on the site.  A central component of the package will be 3D digital reconstructions showing what we think the first church may have looked like, how the site developed with a possible second church to the west, and how eventually the Anglo-Saxon churches were demolished and replaced by a Norman church in or around the 1070s, which too changed over time.

Our reconstruction of the first church at Lyminge will draw upon what we know from the dig itself and from the tiny number of other churches of the same date that still exist or about which we know something from archaeological excavation.  The church at Reculver was only a little larger than that at Lyminge.  We know a lot about this one because it was demolished as recently as 1809.  The reconstruction below was commissioned by Historic England. 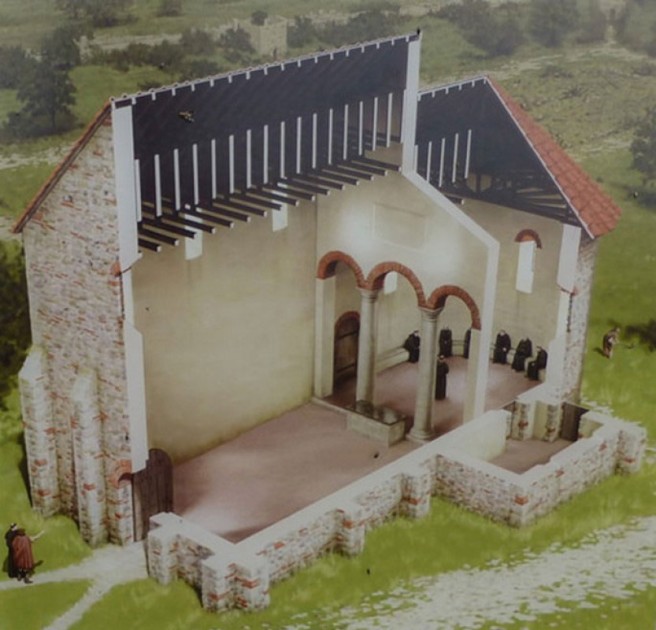 Another church at Bradwell-on-Sea in Essex is of similar date and more of this survives.  The nave is largely intact, although the semi-circular chancel has been demolished.  You can still see the remains of the blocked-up triple arcade separating the nave from the chancel in the east end of the standing church.  The brickwork preserved in this wall is the remnant of the same kind of arcade you can see in the reconstruction of Reculver above, and which we know also existed at Lyminge. 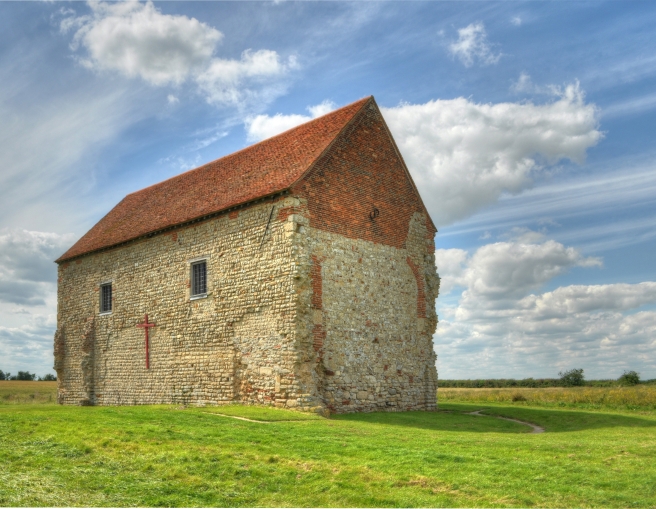 The surviving nave of the 7th Century church of St Peter, Bradwell-on-Sea.  (The outline of the chancel in the grass is just visible to the right of the picture)

The presentation being prepared by the CSCC will give a lot more substance to the Anglo-Saxon church.  A lot of this will be conjecture, but we will use all available sources to provide as plausible a reconstruction as possible.  This will include the fragments of masonry found in and around the Memorial Garden: one found in 2019, and the others found by Canon Jenkins and explored again in 1991 before the Memorial Garden was created.  It is possible that this was the site of a second church and the location of the shrine of St Eadburh, although it has to be accepted that this is a very tentative speculation.

The reconstruction of the church site will also show how the Norman church was built around the 1070s and then changed through time.  We are aiming to incorporate photographic images of the church as well as the reconstructions prepared by CSCC.  Photographs, especially postcards, are a very useful way to see small changes happening.  Picture postcards have only been in existence since 1902, but we can see that some early postcards drew upon much older photographs.

The following sequence of images shows the kind of changes we can identify.  Clearly the interior of the church has never stood still for long, and has been in a constant state of change over the years. 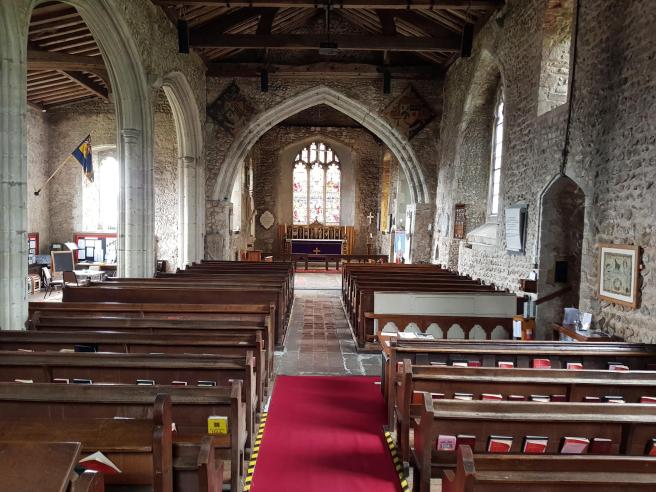 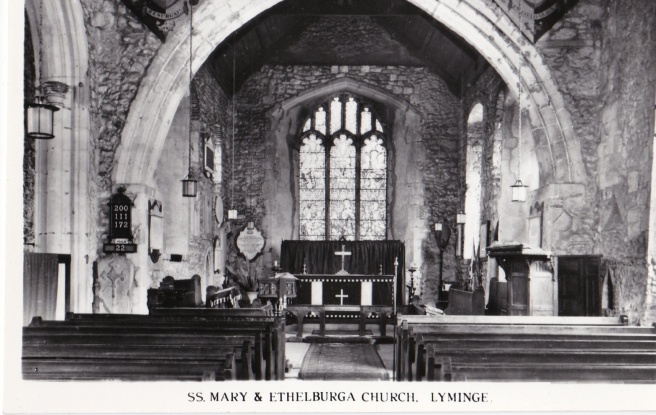 St Mary and St Ethelburga Lyminge, the nave looking east, c1960?  Note the hanging electric lights, the pulpit and the choir stalls in the chancel.  The reredos is covered, probably for Lent 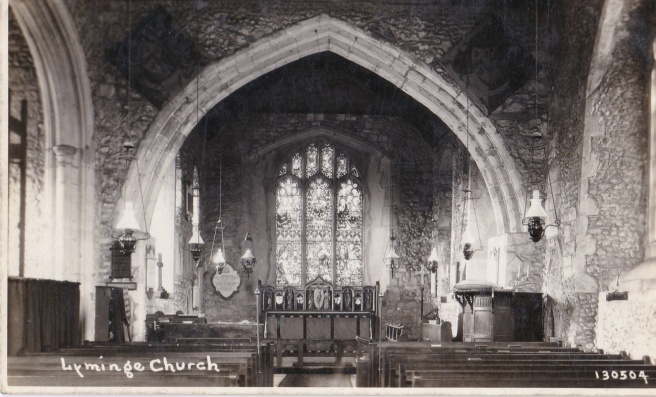 St Mary and St Ethelburga Lyminge, the nave looking east, c1920-30.  Note the hanging oil lamps, which were replaced with electric lights at Easter 1932, and the reredos which was installed in 1915.  At this time, the organ was still located at the east end of the north aisle 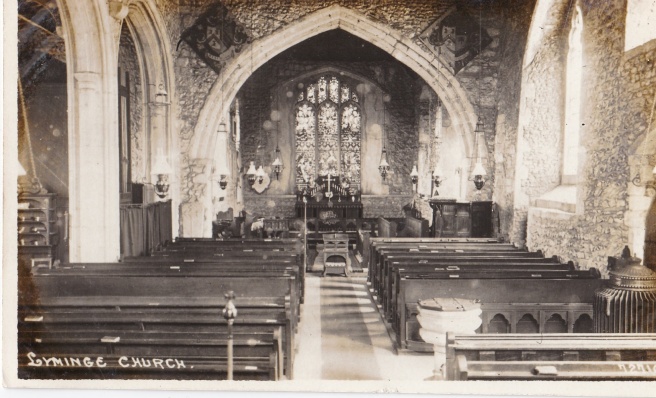 St Mary and St Ethelburga Lyminge, the nave looking east, c1914?  Note the font close to the south door and the boiler.  This photo pre-dates the installation of the reredos in 1915, but the altar arrangement post-dates the picture below 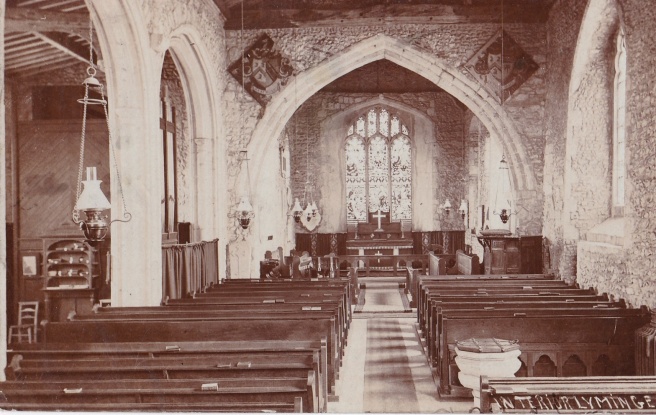 St Mary and St Ethelburga Lyminge, the nave looking east, before 1908.  Note the much simpler altar compared to the previous picture.  The postcard has a postmark, so the picture was taken no later than in 1908 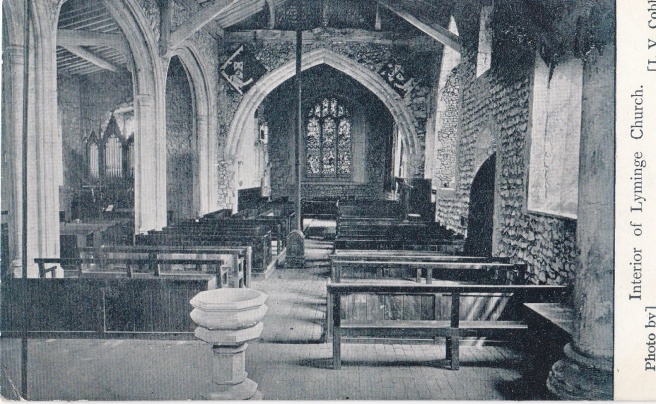 St Mary and St Ethelburga Lyminge, the nave looking east, before 1896.  Although the postcard must date no earlier than 1902, the image clearly dates to before the extensive refurbishment of 1898-1900, when the pews were replaced, the roof was repaired, the heating system was changed and the brick floor was replaced.  Note the old organ, which pre-dated the current organ installed in 1896, the much simpler altar, and that the font is in yet another place.

These pictures all come from my own collection.  The church has its own collection and so does the Lyminge Historical Society, so we know that we will be able to access lots of interesting pictures of the church over the past 150 years or so.  But it is still very possible that there are other pictures out there, unique images that record something not found in the archives we know about.  We would like to make our visual record of the church as complete as possible.  So if you have pictures that you would like to share, we would love to see them.  During this period of lock-down, you can share them digitally by sending them to the project email at geopaethas@gmail.com.  If you cannot copy them and would be willing to share the physical images, so we can take copies, you can deliver them to 1 James Close.  But don’t worry if you can’t do this right away.  We are undertaking a long-term project and there is plenty of time for this.  If you are able to let me know by email that you have images that you would like to share in due course, that would be helpful.  We can see about getting copies when the current Covid-19 restrictions have been lifted.

3 thoughts on “Exploring how our church has changed through time”