Earlier this month we put up a post showing how the work is progressing to create a 3D digital reconstruction of the Anglo-Saxon church excavated last summer that we think was probably Ethelburga’s church built in the 630s or 640s.   Work has continued on this reconstruction over the past couple of weeks and the new static images below show how the computer images are being refined.  Ultimately, these will be part of a dynamic sequence allowing you to walk around the reconstructed church and experience it in 3D.

In this image of the outside of the church, texture has been added to the walls underneath the layer of plaster. 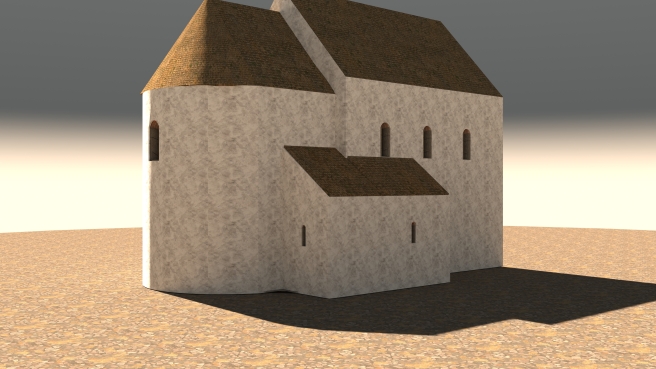 Inside the church, we have added the archway off the nave that leads through to the place where we believe Queen Ethelburga was buried.  In the view below, you are standing in the nave looking towards the chancel with the mausoleum and tomb to the left.  The interior is showing plaster covering half the interior.  It will be possible to layer on the plaster within the model when it is fully functional.  We are still working on the painted scheme that will be available to add as a further layer to decorate the walls.

The previous view shows a lot of illumination within the church, but in fact the interior would have been quite dark.  The following view is from the chancel looking back down the nave, and is closer to the light level that is likely to have been normal within the church.

The archway you can see on the right leads to the porticus that was actually excavated last summer.  If you visit the churchyard, you can see this marked out on the path to the side of the Anglo-Saxon church running under the standing church.  We think this was a sacristy, used to hold the sacred vessels used in the mass.  The entrance to Ethelburga’s mausoleum is just visible beyond.  This lay under the current porch.

There is more work to do before this model is finished, but we hope these images give a good impression of how the reconstruction is developing and already give a good idea of what the church would have looked like.

One thought on “Update on reconstructing Ethelburga’s church”